Saturday, March 21st, 10:30 AM – Join the North Country Peace Group to mark the 6th anniversary of the start of war in Iraq. Gather on Rt. 25A, a mile or two east of the Nichols Road/25A intersection, near the Chase Bank on the south side of 25A (across from the St. James Catholic Church) in Setauket.  From there, those who wish can join us as we process east along the storefronts in the King Kullen, Wild by Nature and Stop and Shop shopping centers.  We will be carrying signs about Iraq and Afghanistan, and the NCPG banner.  Also, we will have handouts for passersby explaining why we are processing and inviting them to come to the bottom of the hill (our usual protest spot at Rt. 25A and Bennetts Road in Setauket) for the rest of our event, which will include a reading of the names of fallen Long Islanders from both wars. 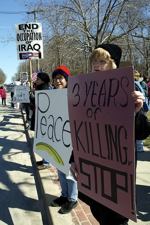 Three years ago,  a similar event was held and several members of Conscience Bay Meeting attended. Their photos appeared in Newesday.